Rage and Glory: The Restoration of an Israeli Controversy 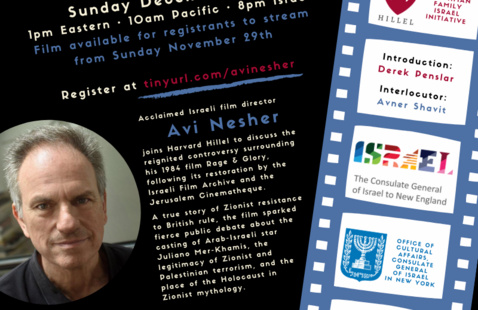 Acclaimed Israeli film director Avi Nesher joins Harvard Hillel to discuss the reignited controversy surrounding his 1984 film Rage & Glory (Za’am v’Tehila) following its restoration by the Israel Film Archive and the Jerusalem Cinematheque. The film tells the true story of Eddy the Butcher, a Zionist freedom fighter played by the Israeli Jewish-Palestinian Arab actor Juliano Mer-Khamis, dispatched to Jerusalem to assassinate an officer of the British Mandate. Released in the aftermath of the First Lebanon War, the film sparked fierce public debate about the casting of Mer-Khamis, the legitimacy of comparisons between Zionist and Palestinian terrorism and the place of the Holocaust in Zionist mythology. Avi Nesher will share his perspective with Israeli film critic Avner Shavit following a historical introduction by Harvard’s Derek Penslar. The restored film will be available for registrants to watch at their leisure in the week ahead of the event.

Please register to receive the Zoom link and get access to the film: https://guestli.st/669045.