Louis C. Elson Lecture: Wadada Leo Smith, "A Dialogue: Creativity and Mercy with a Reflection on the Role of the Artist in Today’s World" 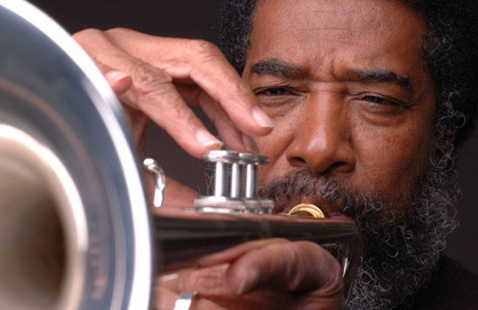 Wadada Leo Smith has been a major force in music for over 40 years, known largely in the fields of avant-garde jazz and free jazz. Transcending the bounds of genre or idiom, he distinctly defines his music, tirelessly inventive in both sound and approach, as “Creative Music.” An early member of Chicago’s legendary Association for the Advancement of Creative Music, joining in 1967, Smith co-founded the Creative Construction Company, a trio with Leroy Jenkins and Anthony Braxton in the late 60s. In 1971 he formed his own label, Kabell, for whom he recorded a number of albums considered classics of their kind. Smith topped three categories in DownBeat Magazine’s 65th Annual Critics Poll: Jazz Artist, Trumpet and Jazz Album for his 2016 CD America’s National Parks (on Cuneiform). His 2012 Ten Freedom Summers was a finalist for the Pulitzer Price. Most recently, Smith received the UCLA Medal, joining the ranks of music luminaries Ella Fitzgerald, Henry Mancini, Herb Alpert and Quincy Jones.

This event will be a webinar including a performance, a virtual conversation with Wadada Leo Smith and Professor Vijay Iyer (Music, AAAS), and a Q&A session.