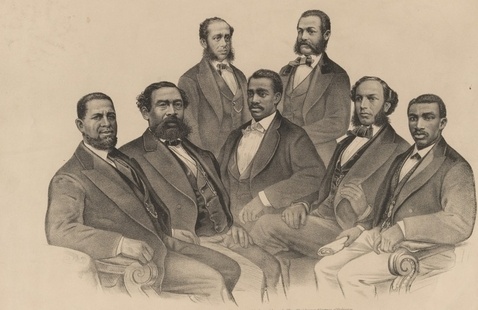 Visit our new lobby gallery to discover a selection of rare books and manuscripts, literary and performing arts archives, with reflections by the students, faculty, fellow, staff and others who use them. This ten-case display will change three times a year.

This spring, the lobby gallery will showcase items from our collections that testify to the contributions of African Americans to music, theater arts, education, and civic life from 1792 to the present day.

- Initiation certificate for the African Lodge of Masonry in Boston signed by Prince Hall in 1792
- Copies of The Columbian Orator, a collection of essays, dialogues and poetry that influenced Frederick Douglass
- Silhouettes of popular 19th-century Black musicians and bandleaders Frank Johnson and Joseph Anderson
- Letter from Harriet Tubman to Boston abolitionist Wendell Phillips, 1860
- Pamphlets documenting the political mobilization of African American communities throughout the South following the end of the Civil War
- Letter from Booker T. Washington to William James about the dedication of the memorial to Colonel Robert Gould Shaw and the 54th Massachusetts Regiment, one of the earliest African American regiments to serve in the Civil War.
- Compilation of original manuscripts and typescripts of songs collected by Newman Ivey White for his book American Negro Folksongs (1928)
- A placard from the 1963 March on Washington for Jobs and Freedom
- Renga for Obama (2017) an occasional poem, with contributions from over 200 American poets, that marked the historic nature of America's first Black president

HISTORY OF IDEAS
Witness breakthroughs in intellectual history through the original manuscripts and printed books that introduced them to the world, on display in the new History of Ideas exhibition case.

The Origin of Charles Darwin's Theory of Evolution

Learn about Charles Darwin’s radical theory of evolution. Items on display include pages from Darwin's manuscript for On the Origin of Species (published in 1859) and a letter presenting his book to Adam Sedgwick, his former professor and a evolution skeptic.

The History of Ideas case was created in recognition of a generous gift for the renovation of Houghton Library's Reading Room by alumni donors who wish to remain anonymous. The case hosts exhibits of items from the collections of the donor and the library that change three times a year.

PLANNING TO VISIT THE LOBBY GALLERY EXHIBITIONS?
The lobby exhibitions are on view January 24 – May 6, 2002. Between January 24 – February 25, Houghton Library's exhibitions are open only to current Harvard University students, faculty, and staff. We hope to reopen to all visitors with proof of vaccination and booster on Monday, February 28.