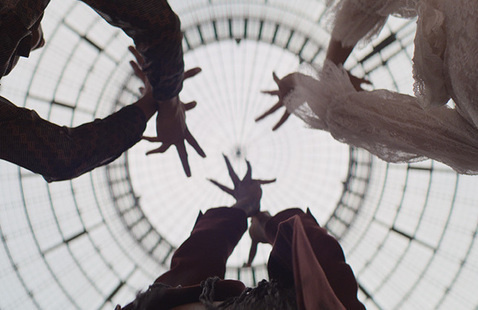 Co-presented by Harvard Dance Center and Theater, Dance & Media, in partnership with the Graduate School of Design at Harvard University.

Join an in-person screening of Gerard & Kelly’s latest work, followed by a conversation with the artists, moderated by Carrie Lambert-Beatty, Professor of Art, Film, and Visual Studies, and History of Art and Architecture.

See the newest chapter in a series of films in which the acclaimed artists Gerard & Kelly explore the interaction between bodies and architecture, from the history of a specific site to its intersection with questions of gender, sexuality, class, and race.

American artists based in Paris, Brennan Gerard and Ryan Kelly create performances, films, and installations at the intersection of choreography, visual art, and architecture. Their work addresses questions of intimacy, memory, and the formation of queer consciousness. Musical collaborations—with artists such as Solange, SOPHIE, Lucky Dragons, and Moses Sumney—have been a throughline of their recent projects. Gerard & Kelly’s work has been presented internationally in art and architecture biennials, festivals, and museums, and has been collected by institutions in France and the United States.

The Visiting Dance Innovators Program is funded by The Provostial Fund for the Arts and Humanities with additional support from the Office for the Arts at Harvard, and Theater, Dance & Media.

The Spring 2022 Visiting Dance Innovators Program engagements are in partnership with Harvard University’s Graduate School of Design and the Peabody Museum of Archaeology and Ethnology.

The SOCH Cinema at Hilles is wheelchair accessible. The film is in both English and French and is not captioned. Assisted listening devices are available. For any other access needs, please email dance@fas.harvard.edu.

Film still from Gerard & Kelly's Panorama, 2021, with performers Soa de Muse, Guillaume Diop and Germain Louvet. View from the ground looking up, we see the upper body and arms of the three performers silhouetted against the glass domed ceiling. Their arms are cross at the wrists above their heads, fingers splayed. We don't see their faces. One performer is wearing a white lacy garb. Courtesy of Gerard & Kelly.