DPE Diversity Dialogue | Identity, Politics, and Morality: The Fight Over the Soul of the Nation in the 2020 Election

This is a past event.
By Harvard Foundation 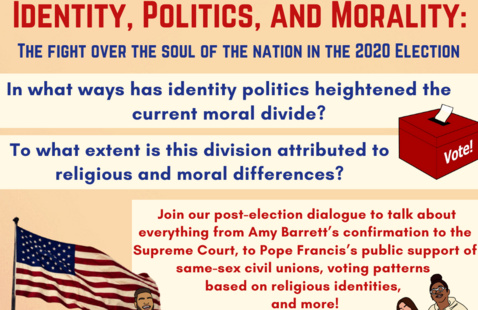 With conversations about the eruption of social unrest in its aftermath, the 2020 U.S. election has shown a nation deeply divided on a multitude of key issues. In what ways has identity politics heightened the current moral divide? To what extent is this division attributed to religious and moral differences?  Whether you are interested in talking about Amy Coney Barrett’s confirmation to the Supreme Court, Pope Francis’s public support over same-sex civil unions, or interested in discussing voting patters based on religious identities, we invite you to join our conversation. At this dialogue we hope to bring together students from a variety of faith traditions and/or political views to explore the relationship between religion and politics, and our national discourse over ethics and morality in light of the recent presidential election. This event is hosted by the Harvard Foundation's Diversity Peer Educators and open to Harvard undergraduate students.

This event is open to Harvard undergraduate students.