Creating the Racial State: Politics, Culture, and Purity of Blood in Hitler's Germany 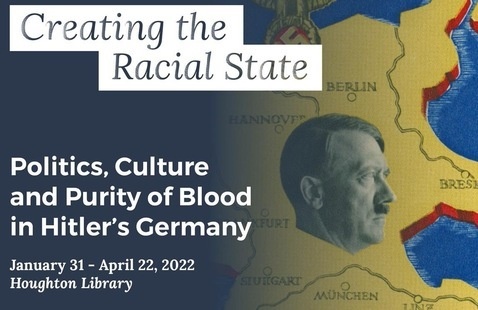 Following Germany’s defeat in World War I, Adolf Hitler emerged as a leader by promising a return to the country's former glory. He envisioned a state designed to sustain and protect the lives of a pure-blooded master "Aryan" race through the exclusion or extermination of all "others." Creating the Racial State explores this history and its reverberation in American culture.

- Photographs by Hitler’s official photographer, Heinrich Hoffmann
- Badges and armbands used to identify Jewish people in the Nazi state
- The genealogical document used by Henrich Himmler to prove the purity of his “Aryan” blood
- The data sheet on Irma Grese, the SS guard known as “The Hyena of Auschwitz”
- Documents used by Benjamin Kaplan, a key member of Justice Robert Jackson’s staff during the Nazi’s prosecution for crimes against humanity at the Nuremberg trials

This exhibition contains images of death and violence, and documents with racist text and symbols, and may cause distress or offense.

The exhibition was curated by Keidrick Roy, a PhD candidate in American Studies at Harvard University.

PLANNING TO VISIT THE EXHIBITION?
Creating the Racial State is on view January 24 – April 22, 2022. Between January 24 – February 25, 2022, Houghton Library's exhibitions are open to current Harvard University students, faculty, and staff only. We hope to reopen to all visitors with proof of vaccination and booster on Monday, February 2.